Here's What Asexual People Want You to Know

Voices from across the ace spectrum discuss their orientation and identity.

These four words, from British Columbia-based photographer Hayley Bouchard, concisely capture the sentiments expressed by many of the asexual (ace) and aromantic (aro) identifying folks featured in this article.

Ace and aro are umbrella terms that refer to a spectrum of sexual and romantic identities, including asexual, aromantic, demisexual and others.

It's good to remember that these terms are fluid and may mean different things to the people who use them as identifiers.

Listening to their stories and voices, it's clear that members of this community encompass a wide range of opinions, identities and struggles.

Though a relatively new area of scientific research, early studies have shown striking patterns of bias towards asexual individuals.

"Relative to heterosexuals, and even relative to homosexuals and bisexuals, heterosexuals expressed more negative attitudes toward asexuals, desired less contact with asexuals, and were less willing to rent an apartment to (or hire) an asexual applicant," Brock University professor Gordon Hodson writes in Psychology Today.

"Moreover, of all the sexual minority groups studied, asexuals were the most dehumanized."

And it's not only discrimination by the heterosexual community.

"Acephobia is a really big problem in the LGBT+ community, particularly in the form of exclusion," Epple said.

Asexual and aromantic people from around the world share their experiences

"Non-asexual people may think that none of us have ever had sex, masturbated or had thoughts of sex. This is not necessarily true — a lot of us have tried sex, and a lot of us even like it. Asexuality is about physical attraction, not sexual function."

"We don't need you claiming that we don't know what we want. We do. We've already gone through every avenue of (possibly) everything else we could possibly be. And if we're telling you who we are, we know it for a fact. There's no (or usually minimal) guesswork involved when we tell you who we are."

"Oftentimes, friends and family worry about us 'ending up alone.' However, some asexual and/or aromantic people choose to have a Queer-Platonic Relationship (or QPR). It's essentially the same as having a best friend that one would be willing to spend the rest of their life with. No two QPRs are the same, and the boundaries of the relationship depend on the people involved. But not everyone wants to have a QPR, so it's important for people to understand that.

"It is also worth noting that QPRs are not just a synonym for a romantic relationship, and allies should continue to learn and understand how such relationships exist outside of the allosexual and alloromantic norm."

"Lots of people already know ace people have different degrees of sexuality, but I think they are less likely to understand some of us can like sensuality but hate sexuality. I'm really into hugs and cuddles, and even some more intimate stuff, but people often consider both as one thing. It can hurt a lot when people say they get it and then change their mind and backfire."

"We are not lonely people who have accepted that we will never find the perfect someone. We do not feel sexual attraction. That does not mean we are incapable of love or despise sex (though there are some of us who do). We can have fulfilling romantic relationships, platonic relationships, and so on."

"Asexual people have children! I went through pregnancy and labor on purpose because I wanted my child. I always knew I wanted children, and that fact didn't change when I realized that I am asexual. It presented a new set of issues, of course. Ultimately, my husband and I went to a fertility specialist and they were very happy to adjust their typical road map to fit our needs."

"I want you to understand how tricky it is to date as an asexual because I know what I want and need is likely very different to yours. Also, just because I'm asexual doesn't mean I'm not capable of emotional bondings; just because I don't experience sexual attraction doesn't mean you can play with my emotional feelings."

"For me, being on the ace spectrum means that I cannot envision (nor really understand for that matter) someone through sexual attraction; but if I feel attracted to them through another form of attraction (romantic or sensual), I can want to have sex with them the same way I would want to watch a movie with them or have a walk with them. It's an activity I really can enjoy, but I can't feel a sexual attraction towards them."

"I think people confuse 'asexuality' with 'not loving people' or 'not having met the right one.' I went through 'corrective rape' because people thought that a 'good fuck' would change my mind about sex. It had the opposite effect."

"I don't think people know how common it is for asexual spectrum people to be harmed by the medical community. Often our orientation is seen as a mental or hormonal disorder that needs to be 'fixed.' Or we get denied healthcare that doctors assume we don't need or will make our asexuality 'worse.' I've personally had to deal with this."

"As an asexual person, the thing that pains me the most is the idea that asexuality isn't a legitimate sexual orientation. When coming out, too many asexual people are met with incredulity, outright denial or even hostility that someone could possibly identify this way. People seem to believe it is some sort of medical disorder (with the associated implication that it can and should be 'cured' by hormone treatments), the result of a bad dating experience or even trauma (implying that therapy or the right person can 'correct' one's asexuality), or that it is synonymous with prudishness, fear or insecurity related to sex."

"Not being interested in sex isn't sad. Enjoying sex with your partner but not being physically attracted isn't sad (just needs to be consensual, of course). Being disgusted by sex isn't immature. We're not broken. We're not sick. Our brains and bodies just aren't geared towards sex. Many asexuals adopt. Many don't. Many would if they could afford it. Some have romantic attraction, some don't. It's okay. We're all people."

Editor's note: Responses have been edited for clarity and length. 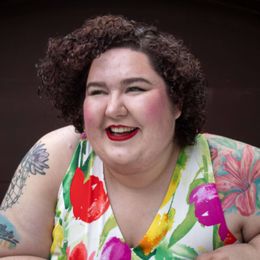 Chaya Milchtein writes about cars, culture and queer life. She empowers people to do the impossible and be authentically themselves. Follow her @mechanicfemme.
Are you here? So are we!