Pumpkin Pie in a Jar: Easy, Delish and 100 Percent Vegan

Well, Thanksgiving is here again and you’ve been asked to bring dessert to this year's gathering. Your first reaction was probably a sigh of relief because dessert is pretty easy on Thanksgiving. You basically just have to decide what type of pie to bring.

But, you don't want to do the same old thing, do you? You're young(ish), hip(ish), and cultured (definitely cultured). Worry not—we've got a simple (eight ingredients and 20 minutes) and tasty treat that riffs on traditional holiday sweets. Bonus: IT'S VEGAN!

Lay it evenly on the parchment lined baking sheet and bake for eight to 12 minutes. Pay attention though, because it can burn easily. Allow crumble to cool before assembling.

While crust mixture is in the oven, whisk together pumpkin pie mix with 1 cup of vegan whipped cream and maple syrup. Chill in the fridge until the crumble is ready. 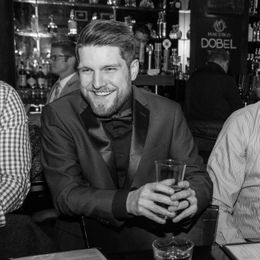 Dylan Thomson von Brendelstudied theater, video production, and film producing over the last 15 years and has worked in many different arenas along the way. He’s a sucker for Austin City Limits and would watch Antiques Roadshow every night if PBS would program it that way. Connect with Dylan on Twitter @DManMegaMix.
Are you here? So are we!