How the Pandemic Changed How We Think About Touch

Vaccines have rolled out, and it's safer to gather. But some are still apprehensive to touch.

Before the pandemic, Farwah Sheikh would attend anywhere from seven to 15 events in a given weekend. Sheikh, who is a New York-based mind, body and soul coach, described herself as a "social butterfly."

"I was constantly in contact with people," she said. "The way I greet people was always giving them a huge hug and maybe kissing them on the cheek."

She would even hug people she'd just met, if they sat down for a moment and got to know each other.

Touching friends, family or acquaintances was simply her norm. In her Pakistani culture, it's considered rude to not give someone a hug or a kiss on the cheek, she explains.

"Everything is about hugging, about grabbing someone's hand, you put your arm around someone," she said.

Then the pandemic hit, and everything changed.

In the past year Sheikh, who lives with her parents and sister, had very little physical contact even with her immediate family, much less anyone outside of the house.

"My parents were at risk," she said. "Especially at the beginning of the pandemic, my sister and I would do all of the grocery shopping, and we literally would not touch."

Sheikh said she's now nervous to touch people again. As vaccinations rolled out and it became safer to gather, Sheikh says she was still very apprehensive about touching others.

"I literally would have to put my arm out and be like 'I love you but I don't want to touch,'" she said of recent interactions with friends or family who wanted to embrace.

"I think for me, it's changed my perspective on valuing relationships, and being more understanding that you do need physical touch, you do need it, but you can be selective about it."

"When you touch someone, you're moving the skin," said Tiffany Field, Ph.D., director of the Touch Research Institute at the University of Miami.

Because touch stimulates the vagus nerve, it has countless benefits to our bodies. Everything from slowing down our heart rates, lowering blood pressure and increasing serotonin and oxytocin — our happiness and love hormones, respectively — can be affected by touch.

Touch also lowers our cortisol levels. Cortisol, "the culprit stress hormone," as Field calls it, inhibits natural killer cells which are the fighters at the frontline of our immune systems.

"So it's ironic that we're in a pandemic where there is basically a destruction of the natural killer cells, in part because people aren't getting enough touch," Field said.

In a COVID survey Field performed, 68 percent of respondents said they were touch-deprived.

Touch after the pandemic

Another survey conducted by YouGov, a research and analytics group headquartered in London, found that four in ten Americans were "very or fairly" nervous about interacting socially with people again. While the survey wasn't specific to touch, it goes to show how the past year has changed the ways we look at social and physical interaction.

For some, like Sheikh, it may take a while before they're fully comfortable touching or being touched again.

"Where I'm probably going to be who I was before the pandemic, but selective with who I decided to touch."

However, a year with less touch has made some even more excited to get out and feel physical contact again.

She remembers a time at the beginning of the pandemic when it was still unclear how COVID spread and she hugged her parents for the first time.

"It was comforting and confusing because I was starting to wonder, 'Is this dangerous?'" she said.

Novick still plans to be cautious. Now that vaccines are more readily available, she's leaning more on the "I'd like to hug everyone" side — yet still feeling mostly stuck in the middle of both extremes.

How will a lack of touch affect us going forward?

There isn't much data surrounding the long-term implications of lack of touch, Field said — mainly because of ethical reasons. It's difficult to deprive human subjects of all touch for extended periods of time.

However, there have been studies with monkeys that show apes with less touch become more aggressive over time.

"The monkey data shows that if you put a plexiglass wall between two monkeys and they can see and hear and smell each other, but they can't touch each other," Field said. "When you remove that plexiglass, they beat each other up."

Even looking at different cultures, Field's team found that teenagers in Paris — a more touchy-feely culture — experienced less physical and verbal aggression than teenagers in Miami, a more hands-off community.

Can we get the benefits of touch without touching?

It's OK you're still apprehensive to touch or in a location where restrictions still make it difficult. You can still tap into the benefits.

"Hug yourself, brush yourself in the shower, or get on the floor and do crunches," Field said, emphasizing the most important element is moving the skin and that this can be done alone.

But, if you can and want to, get out and hug your friends, hold someone's hand, or cuddle on the couch.

"I'm hoping that people realize now that they've been deprived and this is important," Field said. "And I do see a lot of people taking advantage of the lesser restrictions by hugging each other again." 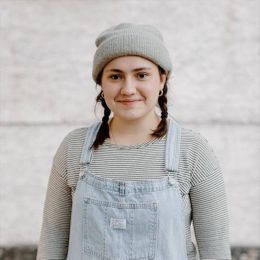 Katherine McLaughlin is a writer and journalist based in Brooklyn.
Are you here? So are we!