As a Black woman, our pain is often ignored. My experience taught me how to make my voice heard.

I was lying on my room floor in excruciating pain. My mother begged to take me to the hospital, but I didn't want to go.

As a Black woman, I often hear stories about how we are misdiagnosed, our pain is ignored and we aren't always given the same type of care that our white and/or male counterparts receive.

Because of this, we are oftentimes leery of going to the doctor when something is wrong, out of fear that we will be mistreated. We resort to home remedies and waiting things out, because we are tired of explaining our ailments to a system often committed to never understanding us.

In my case, I resisted going to the hospital until the pain was so unbearable, I had no choice but to put on my clothes and seek medical care.

This was March of 2019. I was later diagnosed with uterine fibroids, a type of noncancerous growth in the uterus that can be painful.

When I learned of my diagnosis, I was equally shocked and afraid. But it was nothing compared to the events leading up to me spending the night in the emergency room and the unprofessional care that I received once I arrived.

It not only revealed what was going on within my body, but was a lesson in advocating for it.

Before leaving for the hospital, I was in so much pain I couldn't go down the stairs. I contacted 911 to request that someone help me out of the house and into my mother's car.

The operator told me they do not send emergency responders for menstrual pain. I kept thinking that if something was seriously wrong, I would never know, because my cries for help were being dismissed.

It wasn't until I went into detail, explaining that I was also vomiting, that she assumed that I was miscarrying — even though I repeatedly explained I was not pregnant — and sent the fire department out.

When I arrived at the closest hospital, the receptionist explained it would be a few hours before a doctor was available. Even after telling her that on a scale of one to 10 my pain was at a 50, she still ignored me and told me to have a seat and wait.

Frustrated by this, my mother and I decided to go to a different hospital — the hospital I typically seek care from. I could have gone there initially, but it was further away, and I thought I would be treated immediately if I went closer to home.

After arriving, I had a brief conversation with the receptionist who assured me that I would be seen ASAP. Less than 20 minutes later, I was called to the back.

The doctor and I discussed what was going on, my pain levels and if I needed any pain medication. She assumed I was pregnant and miscarrying — even though, just as with the 911 operator, I kept explaining I wasn't pregnant.

The doctor made me take a pregnancy test before doing any kinds of pelvic exams, blood work, x-rays, etc.

Once the results from the pregnancy test came back negative, the doctor then assumed I had an STI or HIV. Once again, before doing any kind of examination, she requested blood and urine tests — even though I explained to her that I was recently tested and everything came back negative.

It wasn't until I got the results that she finally decided to do a pelvic exam and other blood work. While doing the exam, she found blood clots hanging from my cervix, and attempted to manually remove them. All this while I was still in the same pain as I was before leaving my home. It did nothing but make my pain worse.

Finally, after this unsuccessful attempt, the doctor then stepped away and came back with a printout from WebMB, saying I probably had fibroids and to make an appointment with my gynecologist for an ultrasound, and before leaving, gave me some pain medication.

For over nine hours it felt like a heated screwdriver was being twisted in my stomach. I could not stand up, lay down or sit for too long without hurting. I endured vomiting and had a fear like no other, thinking the absolute worst.

And it took me pleading with a 911 operator, a receptionist and an ER doctor to finally be treated.

This experience taught me three things.

1. Speak up for yourself.

If you don't speak up for yourself, no one will. While medical professionals are trained to treat the human body, the reality is we know ourselves better than anyone else. We know when something isn't right and when we are being treated unfairly.

While in the ER, I should have insisted the doctor not test me for pregnancy, or STIs. Those tests were unnecessary, especially when I knew that all those tests would come back negative and there was something more seriously wrong with me.

I also should have objected to the doctor manually removing blood clots from my cervix, when I was already in excruciating pain that was worsening over time.

2. Don't be afraid to ask for a second opinion.

I left the first hospital when I wasn't seen promptly. That is the same attitude I should have had at the second hospital.

At the time, I was so happy to finally see a medical professional who could get to the root of my problems and make them go away, that I overlooked the fact that she was not the doctor for me.

She didn't listen, and dismissed my pain as anything other than what was wrong, rather than sending me in for an ultrasound or X-rays, or keeping me overnight until my doctor or her backup could see me.

I should have demanded that I see someone else even after she finished. Thank goodness I was able to see my doctor the next day. I was in pain for over nine hours, scared that something life-threatening was happening, and received unfair treatment.

Due to my fear of hospital mistreatment, I put off going to the hospital.

Advocating for your body is more than standing up to others, it's standing up to yourself too. It's not waiting until the last possible minute to see a doctor.

I consider myself a tough girl, but I put off going to the hospital, thinking the pain would pass over time, or that a natural remedy would help.

I later learned that waiting did nothing but make it more severe. Thinking back, I may not have had the experience I had if I had just gone to the hospital when I felt that first pain.

I probably would have seen a better doctor, and wouldn't have been in pain for as long as I was.

While I hate what I went through, I am grateful to have experienced it. It gave me a first-hand look at experiencing hospital mistreatment, and what to do should I ever find myself in a similar situation.

Because of this, I have made it my mission to encourage women to advocate for their bodies and to know that although their medical professionals have all the training and knowledge, you must fight to make them hear your voice. 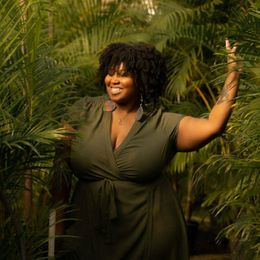 Racquel Coral is a lifestyle writer focusing on self-love, growth and body positivity. She can be found on all social media platforms @withloveracquel.
Are you here? So are we!