How 3 Non-Monogamous Couples Pivoted During COVID-19

Polyamorous and open couples adapt dating practices in the pandemic.

The pandemic has led to major life adjustments for everyone, no matter where we live or how we choose to react to new safety concerns.

For singles, the question of whether to start dating online or in person is raised. For those in a relationship with someone outside their home, the question is whether to include that person in a pandemic "bubble." For those with live-in partners, it's a bit less tricky.

But what about those in open, polyamorous, and ethically non-monogamous relationships?

For couples whose lives include other serious or casual partnerships, dating, swinging or group relationship dynamics, deciding how to adjust to the new normal creates unique challenges. Here's how three non-monogamous couples have adapted during the pandemic.

Lindsey and her husband, Greg, have been together for five years. While they were dating, Lindsey took a class in which ethical non-monogamy was discussed. It sparked her curiosity. The couple talked it over and realized the relationship style was a better fit for them than conventional monogamy.

Like most ethically non-monogamous couples, they agreed on a few boundaries, including avoiding sex with other partners in their shared bed, and checking in before planning dates with others. This made it comfortable for both of them to maintain the relationship.

Their boundaries have shifted during COVID, as Lindsey and Greg have tightened their relationship's guidelines by a mile. For them, online dating has become the new norm, and neither has been on a physical date since the start of the pandemic.

In the past, Lindsey says she's dated more often than Greg, mostly because she's had more offers or opportunities. But she notes there is often a sexist element to dating with a primary partner at home.

"More men approach me to sleep with me or to 'convert me' back to monogamy in an effort to get me to leave my partner for them," Lindsey said. "The people that (Greg) dates seem more interested in who he is rather than what's in his pants."

She says this dynamic hasn't changed much — despite the pandemic, she still gets regular requests for hookups.

"You'd think people would be less likely to have a one-night stand in the middle of a pandemic, but my experience shows that they're willing to suffer in exchange for some sexual activity," she said.

As a couple, Lindsey and Greg discussed their COVID relationship dynamic and safety concerns. If they ever decide to meet someone in person, they'll only do so with social distancing and masks. However, this isn't easy during the winter months.

"For the time being, Snapchat and FaceTime help us strengthen our emotional bonds with prospective partners until we're able to decide if it's worth testing out the physical bond, too," Lindsey said.

For Matt and Leah, the onset of the pandemic didn't require as much of a relationship pivot, because neither partner was actively dating other people seriously, or even really looking to.

"I had been having a difficult time with dating due to mental health issues and time commitments, so I wasn't particularly interested in meeting anyone new," Matt said. "There wasn't much of an adjustment to be made."

The couple has been together for nine years, and opened their relationship about a year ago. They describe themselves as somewhere between ethically non-monogamous and polyamorous.

Leah described the ethically non-monogamous perspective as something "I have been interested in as long as I've been able to think critically about relationships."

During the pandemic, that aspect of the relationship has taken a backseat. Leah had been seeing people only casually, more of a friends-with-benefits approach than building meaningful connections. While she and Matt both had dated more actively before, they just happened to be in momentary pause from serious connections as the pandemic started.

For Leah, this was a signal to let go of the casual relationships, which didn't feel worth trying to maintain as physical connections became less safe.

"It was a combination of stress from a global pandemic and just less of a desire to maintain those more casual relationships when I wasn't seeing people I was close with," she said.

As the pandemic worsened, the couple decided not to pursue other partners due to the combination of safety risks, Matt's position as an essential worker, and his own mental health needing priority.

Leah had friends with polycules (a polyamorous group, linked by their relationships to each other) who had contracted the virus, and this also influenced the decision to lean away from non-monogamy for the course of the pandemic.

"What is most interesting is that I'm choosing to value existing relationships with people I care about, rather than spend the time and emotional energy to build new ones," she said.

Erin and Ryan are nesting partners, a common phrase in the poly world that refers to a non-hierarchical live-in partnership. They are in a polycule with John, 29, who identifies as bisexual, and Lucy, 32, who identifies as non-binary and pansexual.

The result is that each member has metas (short for metamour, the partner of your partner), and often a person's meta is also their active partner as well. In addition, Erin has queerplatonic partnerships that have developed since the pandemic began, and other members of the polycule have outside relationships as well.

At first, it sounds like a lot to wrap your head around. But, ultimately, their polycule (and many like theirs) is just a group that has several distinct relationships within it, and an overarching support network of love and care between all members. They're a "chosen family" and often spend quality time as a group.

Their polycule is non-hierarchical. According to Erin, the members "greatly value autonomy and believe that each person is in control of their own body and time."

"None of us have veto power. We avoid using words like primary and secondary. We try to minimize couples' privilege as much as possible," she said.

Their boundaries prior to the pandemic were limited and dealt with sexual health. They've made adjustments during COVID to factor in the added risk of a larger network of physical relationships. Consideration for their partners is always a priority, but Erin says in their case that may look a little different.

"I imagine each of us having a decision-making formula that contains all the variables needed in order to make an informed decision. If a partner is showing me consideration when making decisions, (that) doesn't mean that the formula will equal a decision in my favor," she said.

"The decision made should still be the authentic choice of the person. Consideration is simply knowing I was included as a variable in their formula at all."

During the pandemic, variables have "shifted in size and importance" for the polycule.

For instance, early on, they chose not to pod with any other households, and any dates took place outdoors with social distancing. They chose to isolate as a nesting pair household for the first four months. Once more was known about COVID, they adjusted their assessment of which risks were worth taking to maintain the relationships outside of their household, with added cautions.

They agree to inform each other if they want to engage in risky activities with people from outside the pod, so that the other members of the polycule can assess if the risk is acceptable to them. If it's not, but that person decides to go ahead with the decision, they're able to quarantine in a designated part of the house before getting tested and reentering the group. This allows for the ever-important autonomy and safety.

With all these changes, Erin says her relationships with some of the non-nesting partners have at times felt like long-distance relationships, despite being local.

"You can see them, but can't touch them. You have to schedule out visits far in advance," she said. "Each 'visit' feels like a special occasion."

This has led to challenges in the lack of physical intimacy, but benefits in the strengthening of mental connections.

Ultimately, this situation has been something they view as a highway they're traveling on with no clear destination. When the pandemic is over, Erin said, they will "take a rest stop to check in with each other about which direction we would like to proceed in."

Then they'll all have the opportunity to reassess and adjust once again, making the right choices for each person.

*All names have been changed to protect anonymity. 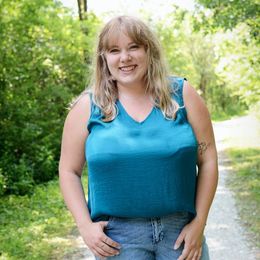 Annie Burdick is a writer and editor living in Oregon. She has two nonfiction books coming in 2021.
Are you here? So are we!