Memories of Juneteenth, Sprouted in Texas and Nurtured Today

A TPT colleague shares how Juneteenth celebrations gave her a sense of self, belonging and pride.

I am a direct descendant of Texas slaves who, on June 19, 1865 — two-and-a-half years after Lincoln's 1863 Emancipation Proclamation — received the news that slavery had been abolished in Texas…and that they were free.

The freed Texas slaves celebrated that day for years to come. They celebrated to honor their freedom and their remaining family members, to offer prayers, to reassure each other as they moved into an unknown future and to remember the stories of their past. They began calling their celebration "Juneteenth," a blending of June and nineteenth.

With the added participation of a growing number of descendants, the celebration became highly regarded in Texas among African American families. Finally, through the efforts of African American legislator Al Edwards, Juneteenth became an official Texas holiday in 1980.

I have known the name and celebration of Juneteenth since I was knee-high to a duck. We gathered with family and friends to celebrate the honor and dignity of life and liberty. And we celebrated our desire — and that of our ancestors — for the pursuit of happiness.

Juneteenth has taken place in parks, near lakes, on church grounds, in backyards, on Galveston beach and, sometimes, as a caravan of three to four cars, headed to the rural countryside of East Texas or West Texas where there was family.

For our family, Juneteenth starts before dawn, seasoning the barbecue pit and getting it ready for all kinds of meats: brisket, ribs, chicken, pork, goat. Barbecue is an integral part of Juneteenth. So is the barbecue pit, made of bricks.

My father built a pit for our backyard celebrations himself, brick by brick. It was huge. I was so in awe of it, especially the smells that filled the air as the morning went on. By mid-morning, if you were anywhere in the vicinity of the smell of barbecue, you would be beside yourself in anticipation of the first bite — so moist and so tender that the awesomely seasoned meat just fell from the bone.

Once the barbecue was done and you made your choice of meat, it was on to fixings: collard greens, potato salad, red beans and rice, macaroni and cheese, black-eyed peas, fried chicken, all kinds of cakes and pies (especially sweet potato), homemade ice cream, tea cakes and sweet tea. And, for the hottest parts of the day, sweet watermelon slices. Food was in abundance, and there was always more than enough.

A Juneteenth to remember

One particular Juneteenth celebration, when I was about 7 years old, was held on the Brazos River near Columbus and LaGrange, Texas. We were celebrating with my mother's side of the family.

The picnic festivities, besides good food, were filled with games, activities and good talk. In between the eating sessions and conversations, the talks often turned into storytelling, spinning a lesson or two, with a little fun tagged on.

It was through listening in on these conversations that I heard stories about our ancestors and how Juneteenth came to be. I treasured these listening times. They gave me a sense of self, belonging and pride, although I didn't know it was happening at the time.

Part of our children's play, besides jump rope and skipping through the water's edge, was watching the "barbecue in action" and getting a whiff of the aroma coming from the half cow being cooked over a barrel-constructed barbecue pit. Two adults at a time took turns all day, slowly turning the cow as it barbecued in layers. Although there were other meats being cooked over barrel- and ground-constructed pits, it was fascinating to watch adults walk by and cut slices from the layers of "ready to eat" meat from the barbecuing cow.

Music filled the air on the bank of the Brazos River. Every would-be musician in our family had a guitar or homemade instrument. They could all carry some kind of tune, and they loved playing together, imitating the music of the great blues artists like Johnny Lee Hooker, Lightin' Hopkins, Muddy Waters and Howlin' Wolf. Their music wailed in the background while others played cards, checkers, and dominos, and we all danced.

This was going to be an overnight celebration with the music, fun and conversations lasting well into the night. Some were staying with family nearby, while others pitched tents on the river bank. We were with those we loved and called family, some of whom we waited all year to see. This made every year a joy, and the conversations all the more juicy.

Our celebration always ended with prayer from an elder, in honor of peace, protection, love and prosperity until the next year's celebration.

I was becoming more observant as a 7-year-old, and this was the year that I began to understand the significance of the color red beyond BIG RED, the strawberry soda pop that I so loved and could only enjoy once a year at Juneteenth. Mom's rules.

BIG RED was the official Juneteenth beverage, and it deserved to be. It's so good, sugar and all. There is no Juneteenth without it.

That year, my mom promised I could have my own BIG RED — the whole bottle — instead of having to split it with someone else. I was now old enough and could not wait. I stood guard, eyeing the drinks in the coolers, biding my time and waiting in anticipation to have BIG RED with my food.

I started asking, periodically throughout the day: "Why is everything red?"

"It's the color of our freedom."

"It speaks for Juneteenth."

During all my listening of grown folks' conversations and stories spun, I learned about our ancestors' love for us. Knowing that we were coming, they paved the way for the future they envisioned for themselves and for us.

Red, white and blue were the colors of Juneteenth, just like the American flag. They chose those colors purposefully, as they wanted their lives and ours to be associated with and known as the true Americans that the flag represents.

With the stars of the American flag, they wanted to honor Texas and the establishment of freedom for freed Texas slaves and their descendants, declaring a new day in America and a new people, fully entitled to all of the freedom, rights, liberties and pursuits of happiness bestowed upon Americans.

With a deepened awareness of the color red, I understand better the heart and dreams of the ancestry that lives on within me. I wonder if that's why I love the color red so much today.

In honor of our ancestors

I am grateful to my freed ancestors for instilling it into my family, who instilled into my spirit the commitment of my ancestors to have a sense of belonging, to experience pride, kindness, self-respect, dignity and strength guided by love, even when the world wanted to show them, and now us, at times, that this was not possible or available to us.

Attempts to minimize the story of my ancestors' freedom in 1865 in schools or through total deletion from textbooks made no difference as I got older; our history was already so strongly indoctrinated in me that the red just kept rising.

It cannot be an accident that Juneteenth is observed in the midst of the strife and turmoil occurring in our world today, especially the brutality and lack of dignity shown toward African Americans. It occurs as a continuation of the inhumanity suffered by our enslaved African American ancestors.

No one will be free until the African American is free to live with dignity and treated with the honor and respect that is every person's birthright. Black Lives Matter.

Once freed from slavery, our ancestors created Juneteenth in recognition of freedom, peace and happiness for everyone, so that what happened to them would never happen again to any of us. In honor of their lives and their dream for the future, we can and must all work to continue to their mission for liberty and justice for all. No justice. No peace...for anyone.

I have lots of memories. Most now are more structural and sensory, settled in my body and my senses rather than in the physical details of those precious moments. Laughter, fun, excitement, the joy of beginning the festivities, running, playing tag, jumping rope, sharing secrets of what has happened since last year, and the tears and sadness of saying goodbye to family and friends that I would not see again until the next year. This golden memory has lasted throughout my life.

Today, my family doesn't get together as much in large groups for Juneteenth celebrations. However, each generation knows that we are part of the root of the roots of this celebration, and we celebrate always, in whatever way we can, together or apart, to honor our ancestors, the freed slaves of Texas.

Still now, I love BIG RED. Every once in a blue moon, when it's not Juneteenth, I'll have a BIG RED. It connects me to my feelings and floods all my senses, reminding me of my Texas upbringing, family celebrations and Juneteenth love.

The root of the roots of this Juneteenth celebration sprouted its growth in the nurtured and fertile soil, under the Texas sun, spreading itself into a movement now celebrated worldwide, honoring African American freedom, achievement and unity amongst all people. 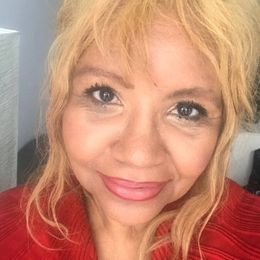 Amanda Green is a Partnership Development Manager at Twin Cities PBS. She is an enthusiast of the Arts and an advocate for survivors of abuse.
Are you here? So are we!