Is Your Jealousy Worth Paying Attention To?

There’s a reason jealousy is known as the big, green monster. It wells up within you like a tide about to crash, and it poisons everything from your thoughts to your actions and, if you let it, your most cherished relationships. It feels like anger and hurt at the same time.

It seems like any kind of feeling this devastating would be avoided like the plague — but jealousy is sneaky. It rises up when we least expect it and whispers everything we’re afraid is true. Jealousy is often painted as an irrational emotional response, but is it ever worth paying attention to? The answer is more complicated than you might expect.

Don't brush it off

First and foremost, jealousy is an emotion. And emotions are powerful things that should not be taken lightly.

“Emotions, including jealousy, seek expression,” said psychologist Mark B. Borg, Jr. “And, especially in romantic relationships, expression occurs only under the condition that whatever is being felt is heard and responded to.

"What this means is that all emotions — including jealousy — require some degree of attention. And just because they are ‘brushed off’ does not mean that they have gone away.”

Why you get jealous

But where does jealousy come from? To make things simple, there are basically two sources of jealousy: our own insecurity, or a violation of trust.

Of course, these two sources apply to people differently and in varying degrees, depending on any of the following experiences:

“Jealousy is an emotional response to threats of something important being taken away from us, usually triggered by an event,” Los Angeles-based social worker Robert Oppenheimer said. “That something could be social status, work status, a treasured object, or even a relationship.

"The key term is ‘threat,’ because often times we confuse the actual meaning of an event. In other words, our thoughts and assumptions about an event may not align with what is actually happening.”

Get to the root of the problem

Although much of jealousy is based in our own faulty imaginations, there are times when the threat we perceive is real. You wouldn’t want to blame warranted jealous feelings on yourself when they actually stem from a breach of trust on your partner's part.

This is where the root of the challenge lies with acknowledging jealousy, Oppenheimer said: You have to give it enough space to figure out what's really going on.

“You want to be able to notice when you are experiencing this feeling so you can identify it and put it in an understandable context,” he said.

You deserve to address the feeling and so does your partner. Being in a relationship poisoned by jealous overtones is no way to live.

“Whatever the reason for feeling jealousy, both partners have the right to feel safe in the relationship,” said relationship expert Rori Sassoon of the matchmaking service Platinum Poire.

So, what is the next step to take once you’ve come to terms with your jealousy? The answer is what it usually is: talk about it. The worst thing you can do is keep jealousy trapped inside to fester.

“When we brush off strong emotions like jealousy, it is likely that they will be acted out and cause more destruction than if they are addressed and worked through directly and mutually,” Borg said.

Acting out jealousy instead of speaking it out can lead to the following destructive behaviors:

All of those behaviors are getting at the same thing: a desire for a sense of comfort. But just like stalling on your laundry won’t make it clean itself, avoiding the one person you need to talk to will only lead to further pain.

If you don’t feel safe bringing up your feelings in a calm, respectful manner, you might not be in a healthy relationship. That is an issue all on its own, and the fractures that come with that won’t be resolved simply by confronting an instance of jealousy.

However, if you are in an otherwise healthy relationship, find a safe environment to talk about what you’re feeling and where you think it might be coming from. If your partner loves you, they’ll be concerned that you feel this way and want to hear you out.

On the other hand, if you jump right to accusations and door slams, you probably won’t make much progress.

“Jealousy often indicates a need to realign and re-establish security together," Borg said. "It indicates that we — not you, not me — need to work together to resolve our insecurities so that we can continue to build intimacy and be accepting of each other as we actually are."

How to talk about it

During your conversation, it’s important to stick to the real issues and how they can be solved rather than pandering for affirmations.

“Unaddressed insecurity is often at the root of jealousy, and it only gets fed when we attempt to make our partner jump through hoops to convince us that we have no reason for concern,” Borg said.

Instead, be willing to look inside yourself before you seek external validation. If jealousy is something you’re used to feeling in different areas of your life, chances are it’s rooted in something deeper than your partner's behavior.

“Start with your own issues first,” therapist Heidi McBain said. “Try to get to the heart of where your jealousy is stemming from. What's missing from your life right now that’s making you feel jealous of others?”

If you determine that the root of your jealousy is not an internal issue, then the next steps you take might not be entirely up to you. Often times, partners unwittingly (or wittingly) participate in behaviors that threaten the relationship or cross a line for the other. Tell your partner why you need them to change their behavior, and listen to their response. Hopefully the two of you can come to an understanding of what behaviors and attitudes make each other feel the safest.

Like it or not, the big, green monster is there for a reason. If you give it the space it needs without letting it rule the roost, it can actually end up doing you a great service.

Pain points us in the direction we need to heal, and when we travel that road with our partner in a healthy, respectful way, our relationship will only get stronger. 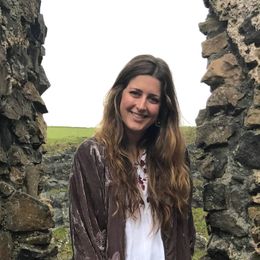 Cara Haynes is an editor and freelance writer who thinks words are probably the most important thing we have. She spends too much time thinking about them, whether that means reading the labels on her shampoo bottles or sending novel-length texts to her husband. When she's not doing word work, she enjoys doing leg work in the mountains with her goldendoodle, Dobby. You can find her wherever there is chocolate-chip cookie dough within walking distance.
Are you here? So are we!