How to Help a Partner Coping with Cancer-Related PTSD

I stopped to catch my breath at the bottom of the stairwell.

At the 12-month checkup with my medical oncologist, a year after treatment for an early form of breast cancer, I'd gotten a good report. No signs of recurrence. Nothing to see here.

Despite that good news, I was in a full-on panic attack.

After getting turned around in the cancer center's twisty hallways, I'd taken a back stairway instead of the elevator to exit. I flashed back to the year prior, when a nurse escorted me between floors for a mammogram and an ultrasound biopsy.

Reimaging that stairwell. Smelling the same sticky air. Walking down just three flights, I was drenched in back sweat, felt an invisible 20-pound weight crushing my chest, and felt tears welling up in my eyes.

For some cancer patients and survivors, even the "lucky ones" who make it, "finishing" medical treatment is far from the end of the cancer journey. And for couples, it's a journey that can throw medical — and relationship — curveballs at any point.

In an April 2019 journal article, though, she and colleagues pointed out that even professionals can miss certain symptoms, mistaking them for understandable responses to a disease we dread so much we often just call it the 'C' word.

"There's more shock and distress in young people with a diagnosis of cancer, partly because it's more unexpected," said Ellis, noting that a higher shock factor may be linked to a higher PTSD risk.

More advanced or ominous-sounding diseases, like brain cancer, can heighten the distress.

Symptoms of PTSD and trauma in cancer patients might include:

Ellis noted that symptoms like fear, avoidance, poor sleep and nightmares lasting more than a month after the triggering incident may indicate PTSD. She said the condition can pop up years after the initial trauma.

Ellis also explained people who've experienced past trauma, who have anxiety or depression, and who have a family history of mental illness are at higher risk, but that a supportive social circle may reduce the risk.

What to say (and not say) to your partner

Erin Bailey wants to erase this question: "How are you?"

Bailey, a program manager at The Foundation for Black Women's Wellness, said we're used to answering either in a surface-level way ("I'm fine!") or totally unloading, often to a person who doesn't expect to hear anything other than "I'm fine."

Bailey said with increases in cancer survivorship — due to better screenings that can catch diseases earlier, and improved treatments that can help patients live longer — there's urgency in getting better at supporting survivors.

At the foundation, Bailey also directs the Madison, Wisconsin, branch of The Witness Project, a breast and cervical cancer prevention and screening program for Black women. And she previously worked at the University of Wisconsin Carbone Cancer Center's Cancer Health Disparities Initiative, which helps make care more equitable, despite a person's race, ethnicity, income or education level, or sexual orientation.

"The cancer spectrum and cancer disparities are super-nuanced," she said, but for example, there's "plenty of information missing" about how Black women cope after treatment. Bailey hopes survivorship research will catch up with advances in treatment, ultimately helping partners and providers be more sensitive to every unique patient.

For now, Bailey suggested partners can ask for concrete ways to help, like handling childcare duties that interfere with check-ups, or going to therapy, as a couple or individually.

"Therapy is always appropriate, no matter your stage in life," she said.

"If you get bad PTSD and don't get any treatment, it doesn't usually resolve by itself," Ellis warned. "That's important: If someone is really living in fear … they need to see a therapist who is trauma-trained."

Both Ellis and Bailey advised checking with local hospitals or treatment centers for therapists and support groups that specialize in the nuances of cancer-related trauma.

While seeking help to rewire negative or fearsome thought patterns, suggested Ellis, partners should get comfortable "naming the elephant" of cancer so that communication flows more openly.

"I think we're slightly uncomfortable talking about people's misfortunes," Ellis explained. "So if someone is saying, 'I could die,' or 'I'm worried about my next scan,' the temptation is to say: 'Just think positive. You're such a strong person.' I think the person saying that means well, but it can feel invalidating."

In response, Ellis said a patient or survivor could say: "Nobody is more positive (or fighting more) than I am, but I want to share my worries so I'm less alone."

Feeling less alone, after all, is a critical part of "feeling well" over the long run.

Moving forward as a couple

After I got home from the doctor on that sweaty, stressed-out day, I did what I usually did after an appointment-induced panic attack: flopped onto the bed and flicked on Real Housewives reruns, focusing very hard on the characters' drama instead of my own.

"What percent should I worry? What percent?" I asked my husband, Mike, when he came into the bedroom to scratch my back.

I regularly followed my panic attacks with a double-header of obsessive questioning: a way of asking my husband, who's a graphic designer and absolutely not a doctor, to somehow reassure me that I would not get sick again. (This is a bad idea.)

"Zero percent?" he said. "And I'm still not a doctor, so I really can't answer those questions."

As Bailey noted, when a partner who's unwell gets concrete support, it can bolster them in critical ways. But eventually, the supportive partner likely will need their own help, too.

"Last year, being your partner felt like we were each one half of a full person trying to get through it," Mike said later, reflecting on my treatment period. "It sucks. It's not happening to you, but it's happening to someone you care deeply about. You wish you could fix it, but you can't."

My situation — our family situation — is far from perfect now. Any medical appointment besides an optometrist visit still sends me into a panic attack. I rely on a combination of therapy and anti-anxiety meds to keep troubling thoughts at bay.

But I'm thankful for the privilege of a support system, especially during a dark time and its aftermath.

"As much as we might try to get back to a point where cancer isn't a regular topic of concern, it lingers in the background," said Mike. "For now, the best we can do is try to live a healthy life, together." 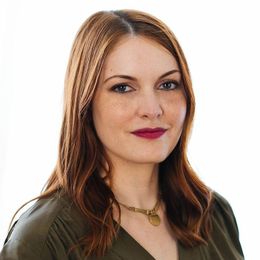 Jill Hilbrenner is a writer and editor based in New York City. She loves blues music, yoga classes, and her rescue dog, Blanche.
Are you here? So are we!