How I Came to Accept My Asexuality

Regardless of how you identify, you are worthy of love and happiness.

After spending four years at a private high school for girls, I realized I was not like everyone else.

There wasn't a day that went by when I didn't overhear a conversation about sex. Up to that point, I'd rarely talked about sex aside from those awkward conversations in sex ed class, but this was different.

The intensity with which my peers talked about this "life-changing" act was something I could not fathom. I did not understand the appeal and, frankly, I didn't care.

It wasn't long until my parents noticed that I did not have the same desires as my friends. Not that they were expecting me to have sex as a teenager, but the fact that I didn't talk about "hot boys" the way my friends and my sister did concerned them.

As most people do, I turned to Google for answers. After browsing through dozens of websites, I came across asexuality. I'd never heard of the term before, but this sounded exactly like what I was experiencing.

The definition that resonated with me the most was the following: "Asexual people ... may have little interest in having sex, even though most desire emotionally intimate relationships."

It was like I had finally hit the jackpot — I wasn't alone. After learning about asexuality, I immediately felt a sense of relief that other people had the same feelings regarding sex and physical intimacy.

Difficulty in the dating scene

While I accepted my asexuality, I think the larger fear came with finding a partner who was either asexual or would be willing to have that hard, yet important, conversation about sex that many relationships rely so heavily upon.

As I predicted, when I entered the singles scene as a 20-year-old, nobody was interested in dating someone who didn't want sex.

I knew this was going to be a long road — not because I wasn't comfortable with my sexuality, but because other people were uneducated about it. As with most foreign ideas, people can be scared of what they don't know.

I made it my mission to educate people about asexuality by "coming out" and being a voice for my underrepresented community members who deserve to find relationships and lead happy lives.

When I went on dating apps, I would quickly disclose that I was asexual and if that was a problem, I would rather be transparent and let the other person know upfront.

Many did not know what asexuality was or questioned if it was even real. After explaining how I was more interested in emotional connection than physical intimacy, it clicked for some, while others were not satisfied.

"I'll change your mind" was a common line used by many individuals on online dating apps.

While it was disheartening to face frequent rejection, I knew my story was far from over. After talking about this with my therapist, she told me something that shifted my perspective.

"You will find someone who appreciates you for all that you are," she said. "Regardless of your sexuality, there are people out there who will be open to your honesty, compassion, generosity and kindness."

It was these words that gave me the courage to continue living authentically as an asexual woman. To help me become more comfortable, I made the conscious effort to distinguish my sexual orientation from my romantic orientation.

The ability to make this distinction gave me a sense of clarity and peace that I had something going for me in terms of a relationship, even if it wasn't physical.

Many asexual individuals, like myself, crave emotional connection and romance. While I don't like to be very physical, I am definitely interested in holding hands, cuddling and going on dates.

Instead of viewing my relationship preferences and standards as a burden, I started to view them as unique. There is only one version of myself, and whoever I decide to spend my time with is lucky to have me along for the ride.

While the journey to accepting my asexuality was not easy, it was definitely worth it, because if you don't accept yourself, you can't expect anyone else to. Once I gave myself permission to be my authentic self and be open about my orientation and identity, my life changed.

Fast forward to October of 2020, when I met my wonderful girlfriend. She was beyond willing to understand where I was coming from and we were able to have a conversation about our needs and wants in a relationship.

Luckily, she was similar to me in that being physical wasn't at the top of her list of priorities in a relationship. Now, what was once my biggest insecurity is embraced by someone other than myself.

Regardless of how you identify, you are worthy of love and happiness — and that is something I had to learn the hard way.

However, if it weren't for my struggles, I wouldn't be the person I am today or be in the lovely relationship I'm in. If I can help one person feel less alone in their sexuality, that is all I want because that would have helped me tremendously as a young queer person. 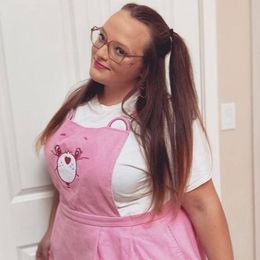 Casey Clark is a freelance writer from NYC who specializes in beauty and lifestyle. Her work has been featured in Women's Health, Allure and SELF.
Are you here? So are we!