How To Help a Friend in an Emotionally Abusive Relationship

The more information you have, and the more willing you are to talk about it, the better.

You've seen less of your friend since they started dating their new partner. Or perhaps, when you do see them, they seem withdrawn, quiet or dejected, and you're starting to become concerned.

You've never liked their partner, but is it something more?

Knowing how to recognize the signs of an unhealthy relationship and how to offer support could make a huge difference for our friends, but it's far from easy.

"We want to think that it's black and white," said Emily Lloyd, a program manager on the national program team at One Love, an organization that educates young people about healthy and unhealthy relationships.

"Because we want to think that we would recognize when our friend is really in an abusive relationship. But because it's not black and white... we don't."

Emotional abuse is a subset of intimate partner violence, which is the intentional use of power and control tactics by one intimate partner over the other in order to create an environment of fear and intimidation. Sometimes, intimate partners use physical violence as a mechanism for control, but other times they use non-physical tactics, which can encompass everything from insults and humiliation to gaslighting and coercive control.

These signs can be challenging to recognize from outside a relationship, said Zoë Flowers, CEO of Soul Requirements, a healing center consulting organization.

More than one-third of Americans have experienced psychological aggression from an intimate partner in their lifetime, according to the National Intimate Partner and Sexual Violence Survey.

If you suspect something is going on with your friend's relationship, there's no one-size-fits-all response for responding and supporting them. But the more information you have, and the more willing you are to talk about it, the better.

"In recognizing the signs in our friends, the biggest one is withdrawing," said Zoë Heitzinger, prevention outreach specialist at Domestic Abuse Intervention Services (DAIS) in Madison, Wisconsin. If you notice your friend keeps cancelling plans, stops showing up for events or won't text you like they used to, it's a good time to check in. Abusive partners will exert control over the people their partners spend time with.

"If someone's partner is constantly described by the person in the relationship or friends as a 'jealous person,' that's usually a big red flag," said Lloyd, who uses the "10 signs of an unhealthy relationship" to talk to teens about these behaviors.

But no matter how much you read or educate yourself on these signs of abuse, it's not going to be easy.

"It's really hard," said Flowers. "This is the thing with our culture, we want red flags, we want seven tips, but these things are very complex. You're only going to know what a survivor wants you to know for the most part."

Heitzinger said sometimes, we just need to trust our gut instinct. Many tend to recognize when something feels "off," even if they can't name it. At that point, it's time to check on your friends.

If you suspect your friend is in an emotionally abusive relationship, you're going to want to get them out. But it isn't that simple.

"Your friend is never going to break up with someone because you tell them to," said Lloyd.

"What we're really doing when we say, 'They're terrible, you should break up with them,' not only are we saying 'you made a bad choice,' but we're kind of mimicking the behaviors that that unhealthy or abusive person is doing by saying 'here's what to do.'"

Start by just making observations and asking questions without any judgment. Use "I noticed" statements to point out behavior that concerns you, said Cheryl Kolb-Untinen, the prevention, education and clinical services program director at Cornerstone, an organization that supports people of all genders experiencing violence.

For example: "I noticed that when we were out, your partner acted a certain way." Or, "I noticed that you share phone passwords." Even if they dismiss it, they won't forget that you opened the door to a conversation, and might reach out in the future.

You can't make a decision for your friend about whether to stay or leave — that has to come from them. What you can do is ask them genuine questions and listen intently to their answers. Don't try to fix anything that they aren't asking you to fix, just let them know that you're there, you love them and you're willing to talk when they want to.

If your friend is at a stage where they are disclosing the abuse, using that terminology and admitting it to you, recognize that it may be the first time they're even admitting it to themselves.

"One of the best things as a friend you can say is 'I believe you, I believe your experience, I believe what you're going through,'" said Heitzinger.

Spend some time doing your own research and finding resources to offer to your friend, said Flowers. But don't judge, and don't push them in one way or another. "Sometimes we're just giving them the breadcrumbs and letting them know that we'll be there for them," she said.

Why won't they just leave?

It's important to recognize that abuse is often a cycle. One day your friend's partner might be volatile, aggressive and abusive, but the next they might be apologetic and promise never to hurt your friend again. And if your friend loves their partner, they believe them — which makes it all the more difficult to see the abuse or leave the relationship.

"It takes a while for a person to work their way out of it," said Carolyn West, Ph.D., a speaker, filmmaker, author and domestic violence expert.

"Have you ever had an argument with a friend and said, 'I'll never forgive this person' and eventually you did? Or stayed in a job that wasn't so great but you stayed anyway because you needed to make it work or invested in a situation? It's the same thing, so we have to practice some grace."

For this reason, it's important to always center your conversations with friends around behaviors, not individuals. If a friend calls their partner a jerk, listen but don't join in, said Kolb-Untinen.

"What we do know is that people come and go from an abusive relationship a number of times. Now if they go back, their thought process might be, 'You kind of agreed with me that he was treating me bad, now I went back and you're no longer a safe person for me to disclose to."'

There are many other factors that might make your friend hesitant to leave the relationship or seek outside support, including a distrust of institutions that are meant to protect them.

As Flowers points out, while Black women face abuse at a higher rate than white women, they might be hesitant to seek support.

"Especially now, people say, 'Well, I don't want to call the police,"' Flowers added. "Somebody that I'm working with now…  she was like 'I don't want the police to shoot him.'"

Abusive partners also look for vulnerabilities, using those to wield control and prevent a partner from leaving. For example, for people in the LGBTQ+ community, an abusive partner might threaten to out them to friends or family who are not supportive and the same may go for undocumented individuals, where a partner threatens to turn them into authorities. One in two trans people will experience intimate partner violence, the highest rate of any population.

Keep in mind that friends who are systemically discriminated against by or marginalized by the dominant culture are more at risk, and might need more of your support.

Before and after a breakup

If your friend decides to leave an abusive relationship, they need you more than ever.

"In a relationship where someone has been controlling, a breakup is the ultimate loss of control," Lloyd said. "Which is why breakups are actually the most dangerous time in an unhealthy or abusive relationship."

Even if your friend's relationship has never been physical in the past, there's a chance that it could become dangerous during separation. Encourage your friend to make a plan for ending things. Lloyd suggests breaking up in a public place, and to let your support system in on what you're planning to do.

"Anything you can to let them know that you're there to support them — not in a controlling way where you're like, 'I need to come with you,' — but giving them options and saying, 'How can I best support you? Here are some ideas I have,'" Lloyd said.

Offer them a place to stay, check in on passwords to devices or accounts that they might have shared and encourage them to take a different route to and from work.

One in three homicides occur during separation, Flowers said, so this is a really critical time. If there is a point where you're really worried, and their former partner wants to meet one-on-one, it could be OK to tell them that people in their situation have been killed, not to scare them, but to let them know how serious the situation might be.

"One of the best things my sister said to me when I did start to tell her what happened — it was when I was being stalked and I had ended the relationship by then… My sister said to me, 'I'm afraid for you.' That made me concerned," Flowers said.

For friends and family who often don't have meaningful discussions about relationships, starting a conversation about a relationship you are concerned about will be even more difficult.

Lloyd said it's important to have more meaningful conversations about relationships even when you don't suspect anything.

"If you talk about that early on, they'll probably be more likely to come to you if they are worried about something," she said.

Lloyd suggests using social media to start conversations, saying to a friend, "I noticed you just posted a new photo with your partner, how is that going? What did you do this weekend?"

"In the social media world we're living in, people have this curated identity, where we put forth the best of ourselves all the time. And people are less willing to talk about the less than perfect times," West said.

"I think the best way to do that is for all of us to be a little more candid." 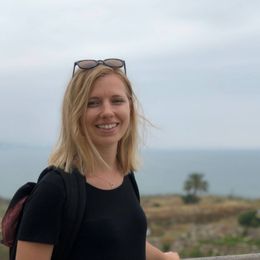