By now, we all know the inspiring story — popularized by the Academy Award-nominated film "Hidden Figures" — of the Black women mathematicians who worked at NASA during the Space Race.

Duchess Harris, professor and chair of the American Studies department at Macalester College, knew this story inside and out long before it hit the theaters. In fact, she had grown up hearing about these women. That’s because her grandmother, Mariam D. Mann, was among the first Black women who started working NASA in the 1940s, decades before the film was set.

Harris also knew the story well as an academic, having researched the topic for a book she co-authored called “Hidden Human Computers: The Black Women of NASA.” Geared towards 6th to 12th graders, the book aims teach the full story of these women to the next generation.

Harris spoke with Rewire about her grandmother, the history of Black women at NASA and her book. (The interview has been edited for length and clarity.)

Rewire: The title of your book is “Hidden Human Computers.” What is a “human computer” for somebody who doesn’t know?

Duchess Harris: A human computer takes us back to the early 1900s, when we had to do mathematical calculations as human beings. There were no electronic gadgets that made that happen. It was a profession that was open for white women originally, because they weren't allowed to be engineers. White men were engineers, and then white women were allowed to check the math of engineers. That's what computers did. It wasn't until World War II that black women were allowed to become human computers.

Rewire: What was it like for your grandmother to work at NASA at the time? Was she discriminated against?

DH: I use the metaphor "hidden," because they were put on the grounds of NASA in a space where no one would see them. In many ways, she didn't have the opportunity to be discriminated against. They put the Black women in the area called the west area. The west area was the furthest space away from where the other employees were.

My grandmother stayed in the building where she worked. She ate at her desk the first decade she was there. It wasn't until the 1950s, and for people that know anything about history, it would be around 1954, that's when Brown versus Board of Education was passed. That desegregates the country nationally.

Even though it desegregates the country nationally, the State of Virginia was still very resistant. To modify a little bit, they let the Black women eat in the same building as the white women in the 1950s, but they had separate cafeterias. My book actually has the blueprint from the building that shows that the kitchen separates the white dining from the colored dining.

Rewire: Your grandmother and other Black women were able to work at NASA partially because President Franklin Delano Roosevelt signed Executive Order 8802, which desegregated federal jobs. What motivated him to sign that order?

DH: There was a profoundly respected leader in the African American community. His name was A. Philip Randolph. A. Philip Randolph was a union organizer, which was a big deal, because unions were segregated. Black men had their own unions, and they wanted pay equity. He [Randolph] wanted to have a march on Washington for jobs and freedom. If that sounds familiar, that's what you have 20 years later.

FDR was very intimidated by this, however, and didn't want tens of thousands of African Americans to come to Washington, D.C. and protest the fact that they didn't have equal pay. That's when he agreed to desegregate federal jobs. That's during World War II, that predates the 1960's Civil Rights Movement that most people are familiar with. People don't know that A. Philip Randolph lived long enough to actually go to the 1963 March on Washington.

What you have are two different things happening at the same time. You have the federal government being desegregated, and you have the white male employees going off to war. With all of that, that opened up space for black women to work at NASA.

Rewire: How long did your grandmother work at NASA?

DH: She was there from '43 to '66. In 23 years, she was able to see a lot of progress made, and not just racial progress, also the scientific mathematical progress.

My grandmother actually started doing calculations there using a slide rule, which a lot of people don't even know what that is. It looks like a ruler, and it has something in the middle that you slide back and forth. She went from that to actually using more advanced adding machines, those kinds of things.

Rewire: In the course of your research, did you find out anything unexpected or interesting about this story that you didn't know before?

DH: What I learned about NASA that was amazing to me was finding the deed to the land. NASA was built on what was previously Chesterville Plantation, which makes all the sense in the world, if you know anything about Southern history. Any piece of land that large would've been a plantation. However, actually seeing the document really made me think about, what does it mean that the descendants of formerly enslaved Africans go full-circle from working the land to working at this government agency. I just loved that.

Rewire: What did you think of the film, "Hidden Figures"? How historically accurate was it, to your knowledge?

DH: I think the most important thing that the movie did was bring this story to light. Now, even people who haven't seen the movie say, "Oh yeah. Those Black ladies that worked at NASA." And so the fact that we know that is amazing.

I am an academic, so I'm obviously going to have critique, because it's Hollywood. And so my critique, first and foremost, is that it's Hollywood, which, in some ways, isn't fair, because they didn't say it was going to be a documentary. But some of the things about it that I think they shortchanged the women with, is that the women were invested in civil rights.

Rewire: Tell us about your book and what motivated you to write it.

DH: I wanted to write this book since college. I've known my grandmother's story ever since I can remember, but it didn't have meaning until I went to college. I was one of those young people that just said, "You're just telling stories, and everybody has a grandmother that did something interesting, according to the family."

Then I got in a history class, and that's when I started doing the math. Even though I don't study math, in my head, I said, "What does it mean that she was born in 1907 and she went to college?" I knew there really was no such thing for Black people of that generation going to college. That's what sparked my interest.

Rewire: Who is the intended audience of your book?

DH: “Hidden Human Computers” is for 6th to 12th graders, and it's because my dream is that before I retire, I will have students that come to my classes that have learned about these things in high school. To give you an example of what it means to provide work for 6th to 12th graders, I gave a talk at the math department. I opened up my talk, and I said to the students, "How many of you took math in high school?" And they thought it was the most ridiculous question, and of course all of them raised their hand.

Rewire: What do you think the next generation, or your young people can draw from your grandmother's example, or from these women?

DH: What I want young people to do is learn the whole story of what it meant to have this kind of profession given the history, and the background of the place, and the women, and to think about the politics of possibility, to think about perseverance and what it means if you want something bad enough, if you put yourself in a situation to get it, it can be possible.

Rewire: What do you think that employers today can do to make their workplaces more inclusive?

DH: I think NASA actually sets a good example. A lot of people don't realize that the executive director now is African-American and his last name is Bolden. The reason why I think NASA is a good example is because they took a leap of faith in 1943. What you really have is a long-term commitment to trying to work with people who are not traditionally in a field.

I think there are other workplaces that have decided there's value in this. I think that something just to get out of this story is what does it mean to tap into the best workers that you can find even if they haven't been there before.

One of the questions people have asked is why we didn't know the story. Black women have been at NASA since 1943 but the story wasn't told until 2016. As we diversify workspaces, I think that we also need to diversify the storytelling because what would it have meant if this had happened and no one knew.

Learn more about the history of Black women at NASA by visiting the book’s accompanying digital archive. 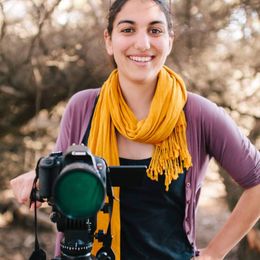 Briana Flinis a Bay Area-based video journalist focusing on science and culture stories. She has produced videos and multimedia pieces for Wired, The Atlantic, KQED and BOOM California. Follow her on Twitter @BrianaFlin.
Are you here? So are we!