How the 'tacky' culture we love to hate becomes the soundtrack to our lives.

Pop culture acts as the perpetual soundtrack of our lives. Whether it's cramming for a final while listening to BTS or wearing the latest trends from Urban Outfitters, our experiences are built around pop culture's luster as it fills in the background and fuels the nostalgia we'll have years later, when our present becomes a past memory.

It's this important and often forgotten figment of pop culture that fuels Rax King's writing. Reading her essays is like finding the perfect lens for an honest and open look at the culture we often keep to ourselves for being too trivial.

"What is considered good and what gets relegated to bad, cringe, are all words for the same thing: tacky," King said.

Tacky isn't just the title of her debut collection of essays, Tacky: Love Letters to the Worst Culture We Have to Offer. It's also a term that captures the uncanny cross section of where low and high brow meet.

"Tacky" refers to culture that people enjoy in large numbers but simply don't want to admit to their friends or themselves. This shame or guilt has become one of King's primary fascinations.

"I am invested in what culture disapproves of in terms of pop culture franchise," King said. "I wanted to be somebody that asked what the value was in all this popular stuff that people thought they were too good for."

It became the inspiration and resonance for what would become the greater theme of her collection, a cocktail of pop culture critique blended with memoir intonations that are always candid and just as often hilarious.

Her interest was further chiseled, fashioned razor sharp while writing "Store Bought is Fine," a popular column for Catapult. It was there that her essay, "Love, Peace, and Taco Grease" was published and went viral.

"It is partly about my relationship with my ex-husband," King explains. "But it's also about Guy Fieri, a cultural figure that I didn't think was getting his due."

After the essay went viral several times and was nominated for a James Beard Award, King realized that this enchantment with low brow culture might not be such a niche thing after all.

In one of the earliest essays in the collection, "Six Feet from the Edge," King confesses her adoration for the band Creed while deftly using the band as a perfect vessel to explain what makes something tacky:

"One reason why people hate Creed so much is because Scott Stapp, frontman of the band, took it so seriously. Every interview with him during the band's peak popularity, he made an ass of himself."

"So when something misses its mark and becomes tacky, it is the kind of cultural object that wins Razzies," King said.

"It becomes this thing that was aiming for something so silly, and it can't even get that."

Creed is considered tacky, while something like Tommy Wiseau's The Room is camp.

The value in 'fluff'

Another example of tacky could also find its definition in dessert.

"The funny thing about dessert is that nobody needs it," King writes in her essay, "Ode to Warm Vanilla Sugar." Dessert is the part of a meal that is neither essential nor needed. It is an accessory to the entrée, the part that can so often be shunned as not only indulgent but also, well, tacky.

"Don't discount how happy it makes you to have dessert at the end of the meal just because you don't need to eat it." The fact that you can have dessert is a lot like how low brow cultural items exist to spice (and lighten) up the prevailing culture.

The denial and disregard of dessert as an important part of the culinary experience is a lot like the increasing practice of devaluing hot takes, media commentary and other cultural journalism. King points out how people resort to the blame game: "There is a type of person who sees a huge number of writers losing their jobs and their response is something like, 'Well maybe you shouldn't have been writing fluff?'"

The unenlightened might look at the essays in Tacky, read the first couple sentences, and shrug off the piece as what King mentioned as "fluff." Yet to anyone that gives it a chance, letting themselves enjoy what's on the page, they'll discover something far more important than one expected.

"People believe that because the fun stuff isn't necessary, you can get rid of it," King said. "It's a dangerous way to think. If you take all that stuff away, and leave only stark journalism and factual reporting, you are left with a very dry landscape of things to read."

"If you don't have any fun stuff, your culture sucks shit."

And at its core, that's what makes all sides of pop culture, high or low brow, tacky or camp, all part of a cultural ecosystem, no individual part any less than the other. We experience things and go through life building our identities and lives. As we do it, pop culture — particularly many of the things that would be deemed tacky — happen in the background.

"Pop culture forms these little threads that weave together with everything else you are experiencing and becomes part of a fully formed memory," King said.

They all add up. The bands you loved "back in the day" become nuanced sensory cues in a memory of your first breakup, the 10th viewing of Hitch being perhaps the background noise for the first time you fall in love.

"These cultural pieces add so much color and so much life to what is otherwise a pretty quotidian experience," King said.

We all suffer hardships, breakups, love, job loss and more, but what ends up overlooked, shrugged off as something you were into once, something that other people don't talk about with hyper-enthusiasm, draped in artistic merit — that stuff is what ends up meeting your memories halfway.

"It gives us this secondary reference point to share and relate," King said. "It makes your experiences your own." 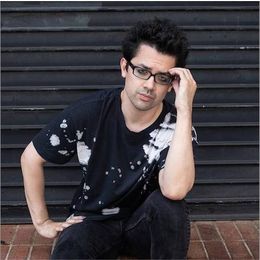 Michael SeidlingerJ. Seidlinger is a Filipino American author of Runaways: A Writer's Dilemma (Future Tense Books, 2021) and other books. He has written for, among others, Wired, Buzzfeed, Thrillist, Goodreads, The Observer, Polygon, The Believer and Publishers Weekly. He teaches at Portland State University and has led workshops at Catapult, Kettle Pond Writer's Conference and Sarah Lawrence. You can find him online on Twitter (@mjseidlinger) and Instagram (@michaelseidlinger).
Are you here? So are we!