Why I Couldn't Be My Boyfriend's Therapist

You both need other people to talk to.

I broke up with my ex-boyfriend on a cool, summer night. After a week of tumultuous texts and phone calls, I finally borrowed my mother’s car at midnight — a bold move in an immigrant household — drove to his house, and parked outside.

He joined me, and two hours later we had “mutually” decided that ending it was for the best. I did not want to, but I felt I had no choice.

We had spent the week talking about him and the “feeling” he had “in his gut” that I wasn’t right for him. He couldn’t explain it. He didn’t know how to put it into words. But he wanted me to help him.

Helping him figure out what that feeling was and where it stemmed from was the hardest thing I’ve ever had to do. And it led directly to our breakup.

'I’m not your therapist'

Over the course of that week, I had begged him to confide in someone else, preferably a therapist who could help him work through his relational and intergenerational trauma that had contributed to all of these feelings.

He didn’t. Perhaps he was too prideful, perhaps he didn’t feel like his issues were serious enough to talk to a professional about. After all, I too had refused therapy for years before my depression and anxiety symptoms got to the point where I was dysfunctional.

I had relied heavily on him — in hindsight, to a fault. Perhaps he thought it was OK for him to rely on me, and only on me.

Your partner can't be objective

There are many reasons people avoid speaking to a professional about their problems. And talking to your partner about your problems is both healthy and common. After all, friends, family and romantic partners comprise the majority of your support system. Studies show that having strong social relationships benefits physical and mental health.

I’m still not sure what the best thing for my ex-boyfriend was at the time. I helped and listened as much as I could, but talking to him about his issues with intimacy that stemmed from his family relationships was beyond me.

I held back tears as he speculated that maybe he was afraid of telling his family we were in a serious relationship because he had doubts about me. As he wondered if his “gut feeling” about not wanting to spend the rest of his life with me was related to his personal baggage or who I was, as a person and partner. As he contemplated his love for me.

I didn’t know any of the answers, but I did know he should have been talking to someone else, anyone else — preferably a professional. I did know that I couldn’t stay with someone who thought and felt those things. He insisted he was just thinking out loud; he begged me not to break up with him.

Unfortunately, he had thought out loud to me, despite my protests to the contrary. As much as I wanted to, I couldn’t erase those things from my memory.

[ICYMI: How to Share Your City and Friends After a Big Breakup]

Have you or your partner crossed the line?

How can you recognize that your partner is using you as a stand-in therapist? Or that you're doing that to them?

There are four red flags to look out for, according to clinical psychologist Samantha Rodman:

This requires self-reflection, Rodman pointed out. I found that my relationships got much healthier and happier when I committed to weekly therapy and self-improvement. We have to hold ourselves just as accountable.

Maybe that’s why I could recognize the signs in my own partner. And I'm grateful, despite it leading to a breakup. But it doesn’t have to end that way.

How to be supportive and encourage therapy

There are many ways to gently encourage your partner to seek professional help for their problems, whether they live with a diagnosable mental illness or not.

Don’t make assumptions about how your partner is feeling, but do discuss what you’ve noticed, like changes in their behavior, or things they said that worried you.

If you suggest therapy, and your partner is hesitant, ask them why.

Ensure these conversations happen when you are relatively unstressed and well-rested. Offer to accompany them to an intake or drop-in session — these are often non-committal.

Most importantly, listen to your partner. You can’t force someone to start therapy before they are ready to, but you can be loving, gentle and encouraging.

And as hard as it sounds, do not be afraid to take a step back from the relationship if their refusal to seek help is negatively affecting you. It is okay to ask them to talk to someone else if you cannot have the conversations they want to have.

Understanding your own needs and setting boundaries will only make your relationships stronger in the long run. 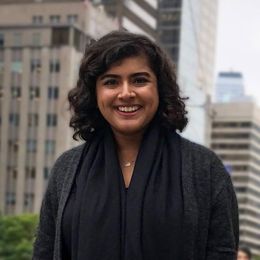 Vanshika Dhawanis a writer based in Toronto, Canada. Aside from writing about mental health and relationships, she enjoys going to poetry slams, listening to musical theatre soundtracks, and catching up on the latest political scandals. Follow her on Twitter @vdhwn.
Are you here? So are we!