They go by many names: mixed, multiracial, biracial and others too offensive to publish. No matter which names they choose, one thing is for sure: the number of people who identify with two or more racial groups are growing. According to the 2010 Census, 9 million people identify as bi- or multiracial, up 32 percent from the first time people could mark more than one race in 2000.

I am one of them. Hey there! Even though I've been this way since I first arrived on this earth in 1989, it took me a long time to really embrace all parts of my identity (half white, quarter Mexican-American and quarter African-American, for what it's worth). I also just recently came to terms with calling myself a mixed-race Latinx queer person of color.

Does the time it took me to come to terms with who I am mean I have an issue with my identity? Not at all. Studies–and individual experiences–have shown that I'm not alone.

In pursuit of identity

Many mixed people find themselves between the racial and ethnic boxes society has put in place. Instead of having our own box, we dip in and out of preexisting boxes that fit depending on the situation we're in. It's called code-switching. You might have heard of it in part from the NPR blog and podcast. Some think it's good, others think it's bad, but, like many other marginalized groups, mixed people do what we have to do to survive.

Despite that, we deal with what are called "microaggressions" on a pretty regular basis. Harvard University education and psychiatry professor Chester M. Pierce invented the term in 1970 to describe insults made by non-Blacks against African Americans. Despite the relatively recent coining of the term, however, all kinds of people have been dealing with microaggressions for a long time—and they still do today.

Microaggressions—insults based on identity that can go unnoticed to the untrained eye or ear—can be small and indirect, loud and on purpose and everything in between. And because mixed-race people identify with more than one group, we sometimes deal with multiple microaggressions at once. Some examples include missing a pay raise a coworker received because of your gender and race and someone making an assumption about you based on how they think you look. The latter example is something that mixed-race people deal with all the time, specifically when someone asks them, "What are you?"

Word to the wise: don't do that.

But here are five things you can and should do to support mixed-race folks.

1. Accept how an individual self-identifies

This tip is as simple as it sounds: If someone tells you their identity, take their word for it, even if they don't fit your idea of what a mixed-race person looks like. The same goes for the terms people use to call themselves, which, like many things, change over time.

Alissa Paris, co-founder of the group Midwest Mixed, knows this first hand. The Minnesota-based organizer identifies as a Black mixed-race woman, in part after hearing two older women use the terms for themselves. Though she's happy to have found a phrase she likes, Paris said it's important to remember that everyone's journey is different—especially for mixed-race people.

"It's all based on someone's experience," she told me. "That makes it complicated for mixed people because there is no 'mixed experience.' No one has the same experience."

If you want to know more about us, just ask. However, please do it nicely, and with good intentions.

"The terms (I used) changed around based on how invested someone really was in hearing my story," Paris said.

The phrase "what are you?" is not an appropriate way to ask someone about their identity. Unfortunately, that doesn't stop people from saying it, or from questioning or even correcting someone's self-identification.

2. Let mixed-race people speak for themselves

No matter how many ethnic studies classes you took in college or how many demonstrations you've gone to, chances are good that the people leading the charge know the experience better than you ever could—because they live it every day. It's important to recognize that and let mixed-race people (or anyone you're trying to advocate for) tell their own stories, but only if they're comfortable doing so.

Paris is working to give mixed-race people in the Twin Cities area that sense of solidarity with Midwest Mixed. The Milwaukee native established the group with Owen Duckworth in 2015 after holding several discussions about race and identity with people in her living room.

Since then, Midwest Mixed has grown to include a series of dialogues, workshops and the first Midwest Mixed Conference in 2017. Paris wants mixed people of all kinds to feel welcome in her group, including those who have no African American or white heritage in them.

There are times when well-meaning allies are not allowed in a certain group or meeting. As an ally, you must recognize that the movement and the work is not about you. While Paris said some of the group's activities are open to everyone, others are open only to self-identified mixed people. The solidarity found in a group of mixed-race people can make them feel that much more welcome–even though their racial makeups might be completely different.

The word "privilege" seems to stir up some controversy lately, especially when it's used to tell someone to check themselves. Instead of saying "check your privilege," however, I would say recognize it. Recognize that, for example, you might have a better chance of finding a place to live and work because of your race or gender.

Researchers measure privilege in a variety of ways, including socioeconomic status, education, and race, though the most commonly recognized term is "white privilege." Paris wants people to know about a similar but different kind of privilege based on skin color: colorism.

Colorism, or discrimination based on how dark someone's skin is, is a big problem, specifically among racial and ethnic minorities. Many darker-skinned people of color have said they don't feel safe around lighter-skinned people simply because of the privilege the latter group receives. Paris wants this to change, and everyone can help.

"Stop enforcing and affirming the single story of the light-skinned girl," she said. "Also stop pushing brown sisters out of the picture. Stop trying to fill your (diversity) quotas with (lighter-skinned people of color)."

No matter your skin color, having privilege does not make you a bad person. However, there are things you can do to help others with less of it.

It's no secret that people of color—specifically mixed-race people—have faced societal struggles. While you can't fix institutional racism or systemic racism on your own, you can learn how to combat them both in your own backyard.

You can and should educate yourself about what mixed-race people deal with today. Midwest Mixed and other similar groups host events in part to help people learn about the mixed-race population and experience.

Paris wants people to know that it's okay to mess up on your journey, as long as you learn from it.

"We have to have the hard conversations where we don't know if we're saying the right words," she said. "We all gotta get clunky to get closer."

However, it is important that you do follow-up research of your own. Simply put, mixed-race people are not your textbooks or your internet. If you have a question about any minority group, you can often answer it yourself with a quick Google search.

5. Remember that we are all unique

No two mixed-race people are the same. It's as simple as that. We all have different stories and backgrounds. Paris touched on the importance of mixed people crossing lines and stepping out of boxes as discussions about race and identity continue.

Some people of mixed experience are more open to talking about these topics than others, but everyone is valid. Recognize and celebrate that. 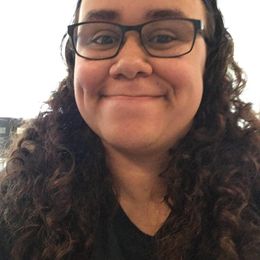 Cass Casarez Writer Cass Casarez (they/them pronouns) enjoys doing crossword puzzles, coloring, reading and playing video games. They will always drink cold brew, no matter the weather.
Are you here? So are we!